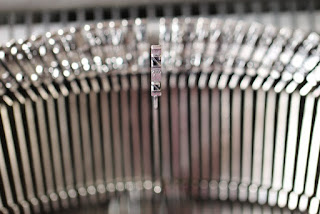 Writers are often are greatly surprised or disappointed by how their work is changed when it is adapted for the big screen. When Irwin Shaw's World War II novel The Young Lions was shot in Paris in 1958, the Nazi character was played by Marlon Brando. Ever the method actor, Brando provoked an uproar by strutting around town in his SS uniform, even going into restaurants to dine. The thirty three year old star was unsure if the Parisians ripping his clothes were doing it out of adulation or disdain. Like most actors Brando wanted to be loved and he took his concern to Shaw that the Nazi be made sympathetic. "You just don't understand the character", Brando told the amazed writer. "It's my character," replied Shaw.

"Not anymore", replied the actor.

Some writers grow resigned to their voices being lost. George S. Kaufman wrote the screenplay for the Marx Brother's comedy Animal Crackers in 1930. He attended rehearsals and realized that nothing Groucho, Chico and Harpo were doing resembled his original draft. He watched as the director Victor Heerman was driven to distraction by the brothers showing up late, placing bets on horses, playing the stock market and never sticking to the script. Heeman literally threatened to imprison them in cages till they behaved. Kaufman took it in stride falling asleep through much of the tomfoolery. At one point the writer woke up with a start and shouted," Oh my God! I thought I heard one of my lines."

A few years ago comedy playwright Neil Simon announced he was moving from Los Angeles to New York. In Los Angeles he was isolated in his car all the time and he felt it is was hurting his writing. Better to be in New York where you walked everywhere and met people. His departure may have been hastened by writing and showing up to the set of The Marrying Man (1991). He got to witness Kim Basinger holding up the production with tardiness, temper tantrums and her much publicized love affair with co-star Alec Baldwin. Simon was humiliated when she held up her copy of the script and stated for all to hear," Whoever wrote this knows nothing about comedy!" The Odd Couple writer was too insulted to help fix the plot problems and the picture bombed.

Some writers are amazed to see their words turn into movie reality. When Margaret Mitchell (1900 -1949) was a young girl in Atlanta, various relatives took her on tours of Confederate battle sites, describing the Civil War so vividly that she imagined she was part of it. It took her ten years to write the text for Gone With The Wind which she scribbled on yellow legal pads, shoving them under her couch when friends would come over to visit her. The best-seller was turned into a movie in 1939 and Mitchell showed up in Hollywood for the fiming of Scarlett O'Hara (Vivian Leigh) nursing wounded soldiers at the Atlanta railway station. The author was overwhelmed by the sheer vastness of the scene. "My God", she told producer David O. Selznick. "If we would have had this many soldiers we would have won the war."

Some writers have strong ideas about who should play their characters. Novelist Tom Clancy was initially unhappy with the fifty year old Harrison Ford cast as the thirty something CIA agent Jack Ryan in Patriot Games (1992) and Clear And Present Danger (1994). He also berated the actor for suggesting plot changes to his stories. Ford angrily retorted that writers who sell their work to the big screen have to expect it to be changed, otherwise don't sell it. After the two films did great at the box office, Clancy hinted that he would be willing to bury the hatchet to get Ford to star in the next Jack Ryan installment, The Sum Of All Fears (eventually made with Ben Affleck in 2002). Ford demurred by saying," Maybe when I'm sixty."

Sometimes stars are better off just following the writer's instincts. Lou Holtz Jr. was disappointed that Jim Carrey brought in a team of writers to change his lighthearted script The Cable Guy (1996) into a dark tale about stalking. Despite Carrey winning the MTV award for best villain, the movie was panned by critics, led to several executives being fired at Sony pictures and became known in Hollywood as "The Straight To Cable Guy".