What Do Stephen King, Jeffrey Deaver, Jonathan Kellerman And Thomas Mann Have In Common? 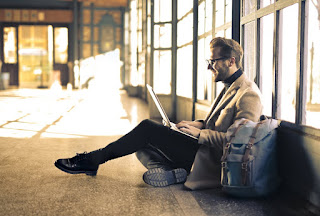 Frequently, I’m asked whether I know the whole story of a novel at the outset of writing it. The answer is a simple “no”.

I might have an idea of where I want a story to go, but often I’m surprised by the direction it may take, seemingly all on its own. How on earth does that happen?

First, let me say that I often make plot outlines and charts as I work, more to keep track of where I’ve been rather than where I’m going. It sounds a bit like “backing into” a story. When I first started CONDUCT IN QUESTION many years ago, I got perhaps a hundred pages into the novel and suddenly had no idea what would come next.

It seemed fruitless to revert to charts and diagrams. Here’s what I did do. For a number of weeks I set aside the beginnings of the novel and spent much time making notes about the characters I had up on the stage, for I realized I didn’t know enough about them.

An example? In CONDUCT IN QUESTION, there are two sisters, Katharine and Suzannah. Actually, they were inspired by two clients I had, only to the extent that those two sisters seemed so diametrically opposed in nature that, when together, they seemed to form some strange sort of unity. Katharine was to be the hard as nails- business- woman and Suzannah was some sort of faded flower child.

But I didn’t know what their fate would be, because I didn’t know enough about them. Although I initially thought of Katharine as the one who would set everyone straight and impose her will on the family, it occurred to me that her toughness might somehow set her up as the perfect victim. Once I started thinking of her in that fashion, she very quickly evolved into a far more interesting character. She would be the victim of the Florist [the serial killer] because her nature caused her to take inordinate risks, which most other women would never consider. Her aggressiveness led to great danger.

Finally realizing she had become so hardened by life and experience, she understood she had never trusted anyone enough to love. And love was what she really wanted. With that line of thinking, the plot, her destiny fell into place.

How to make it end right? It’s very strange but I can see where an essential event will take place, but not what will happen, except in the most general sense. For example, two people in this plot must part forever. Their relationship will be changed permanently. But how? The location will be at a remote and isolated cottage. I can see sand dunes, held in place by scrubby vegetation, with the beach stretching out forever. The wind will be unceasing. Fine so far as it goes. But what and how will it happen? I am hoping the more I explore the setting, the answer will reside in its details.

I came across an interview of various writers on the question of plotting and the making of outlines at www.authorsontheweb.com. They were responding to Stephen King’s statement that he did not make an outline before writing a novel. Jeffrey Deaver, citing the importance of structure of story, said he makes outlines, although that might not be so important in a character or situation driven novel. Daniel Handler says writers who claim not to use an outline are lying because, if you know the end of the sentence when you start it, you’re outlining. Because of his multiple plot lines, Jonathan Kellerman does outline. Of course, the replies show just how highly individualized the creative process can be and, in fact, must be.

For me, each writer must find his or her own way into the world of creating characters and events. In much of his writing, the German author, Thomas Mann, expounded upon the process of artistic expression. Perhaps Mann is best known for the short story, Death in Venice. For example, in his short story, Tonia Kruger, a young man attempting to find his voice and place in the world of literature, says in his letter to his friend Lisabetta,

“The work I have done so far is nothing or not much – as good as nothing. As I write, the sea whispers to me and I close my eyes. I am looking into a world, unborn and formless, that needs to be ordered and shaped; I see into a whirl of shadows of human figures who beckon me to weave spells to redeem them: tragic and laughable figures and some that are both together – and to these I am drawn. But my deepest, secretest love belongs to the blue-eyed, the fair and living, the happy, lovely and commonplace.”

For me, this says it all. Those characters and the events of their lives are in some murky, barely perceptible world of one’s psyche. It’s the writer’s job to weave the spell, which brings them up into life, makes them speak from their inmost souls and then causes them to perform whatever acts they are impelled by their nature and circumstance to do.

Regardless of genre, this is the task each and every writer has in common with another. And each one eventually comes to his or her own method.