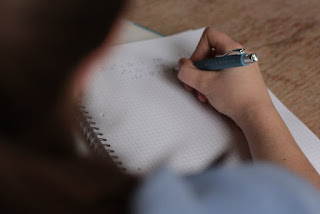 My, my; what a Question, It truly depends on who the villain (ness) is. Are they related to the character? Have they always been around manipulating from the sidelines? Or are they someone who has recently appeared? It also depends on the type of personality they have. Are they outgoing, possibly highly influential or are they
the type that hides and attacks when you back is turned.

Yes you have to give the villain some type of background without going to far, you also to consider are they misguided and will be redeemed in the end, or are they truly going to get what's coming to them.

Each story has a different Hero/heroine so also each one has a different Villain/villainess as such it is only when the tale unfolds that you truly get to know all the characters involved.

I will always have to deal with evil and all around bad guys for the simple fact I write fantasy, if I ever branch out into other genres I may not even have a villain at all life itself is demanding enough, not too mention most of the hero's are jerks we have to reform throughout the story.

So do I ever want to whip my bad guys, of course? They wouldn't be bad guys if we didn't.

I never really know my characters until they start to come to life on paper and then they surprise the hell out me. But I imagine for those who know what each character is like or at least a rough outline does the same thing for the villain. And some times a secondary character just becomes too nasty not to be the bad guy.

As far as how real we can make them, unless you go inside their minds you have to depend on the other characters to help you build them and tell their story some throughout and explain their actions in the end. While doing all of this you makes them real and believable while telling there past as well.

I am not sure if I answered any questions or just raised a few more. I do know one thing absolute on this subject, if you ask a hundred writers you are going to get a hundred answers, all will be different the only thing the same will be well aren't villains characters too?

The Facts of a Writer's Life

March 21, 2019
So, you dream of becoming a famous writer? You want to get that article on paper as soon as possible and see it published. You've got great ideas for a book that you'll be starting any day now. But do you know what it's really like to lead a writer's life? Read on to find out. 1. Rejection is a part of life. Face it. You will be rejected. No matter how good you are, how well versed with the techniques, how intricately detailed. One fine day, you'll wake up and find a rejection in the mail. Don't get disheartened. It happens to all of us. 2. Rewriting will have to be done No matter how good your vocabulary, or how well-written your material, there will come a time, when one editor will ask you to rewrite your work. Take this as an encouraging sign. It just means that the editor likes your work, but needs you to work out a few details to suit his needs. 3. Deadlines have to be met Meeting deadlines is an important part of your career. Miss one deadlin
Post a Comment
Read more