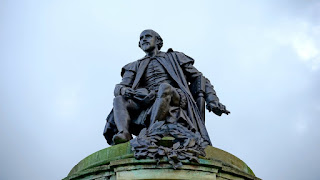 Few people know that many of William Shakespeare’s plays were published posthumously. Virginia Fellows’ Shakespeare Code includes an intriguing discussion of works attributed to Shakespeare that appeared after his passing in 1616. Shakespeare had been dead for seven years when the First Folio of his collected works was published. This celebrated Folio edition contained 36 plays, half of which had never been seen before. According to Fellows, many of the previously unpublished plays “were entered into the Stationer’s Register on November 8, 1623, just in time for publication” a little later that same month.

More fascinating still, a number of plays published previously were altered. There were deletions as well as new additions. Fellows writes: “In the First Folio, The Merry Wives of Windsor has twelve hundred more lines than it had in 1602, Titus Andronicus has a whole new scene, and Henry V is double the length of the 1600 edition.”

Given the fact that Shakespeare was long gone and had left not a single manuscript behind, legitimate questions arise: Who edited the old plays? Where did the new plays come from, and why were they written?

Fellows, a firm supporter of the theory that Sir Francis Bacon rather than Will Shakespeare wrote the plays, looks to the field of cipher writing for an answer to these questions. She emphasizes a fact that may provide a plausible link between the works of Francis Bacon and William Shakespeare. In October 1623, a month before the release of the First Folio, Bacon published a new Latin edition of his 1605 treatise The Advancement of Learning. In this revised and expanded edition, entitled De Augmentis Scientiarum, he openly discussed a method of code writing, the Bi-Literal Cipher, which he had devised when still in his teens.

Coincidence? Bacon advocates don’t think so, and have used Bacon’s own Bi-Literal Cipher to hunt for hidden messages in Shakespeare’s works and a number of publications by several contemporaries that exhibited the same odd typesetting features as the First Folio. (For a detailed description of the Bi-Literal Cipher and quotations of deciphered materials on Bacon’s hidden life as the unrecognized oldest son of Queen Elizabeth I, see Fellows’ captivating book.)

Bacon’s Bi-Literal Cipher requires a substantial volume of text: it’s designed in such a way that for each encrypted letter, five “outer” letters are needed. Furthermore, cipher-sleuths such as Mrs. Elizabeth Wells Gallup concluded, rightly or wrongly, that only italic letters were used in the bi-literal cipher believed to be embedded in Shakespeare’s works—which would rapidly multiply the volume of outer or “enfolding” text needed to contain the hidden messages. Fellows reasons that this demand for extensive cover text could well account for the adding of sections to old plays and the production of new ones.

While this may be the case, I think it’s only one of several possible answers, and by no means the most important one. The quality of the outer texts—the plays themselves—is simply too exquisite to have been produced merely for the benefit of hiding secret stories—whose quality, if the various decoded segments are correct, is often inferior to the outer text. Let me offer another explanation instead: I believe that the plays were essential to Bacon’s life work, which he summarized as The Great Instauration.

Early in his life, after much disappointment in the stultified state of learning he encountered at Trinity College, Bacon, the young genius, set himself to the monumental task of bringing about a scientific, literary and cultural revolution—both in England and in the world at large. All his future research and writings contributed in one way or another to this all-encompassing goal. In 1620 he finally disclosed this vision for a new golden age of peace, prosperity and enlightenment in The Great Instauration, and a few years later he painted an enticing picture of this new kind of society in his little book The New Atlantis.

The method he conceived of to bring about the Instauration consisted of six parts or steps. The three first steps were dedicated to an inventory of the state of knowledge and to employing a new scientific method—that of experimentation and inductive reasoning—that would replace the fruitless dialectical reasoning prevalent at the time. His various natural histories were examples as well as components of the inventory process, and his classic Novum Organon—the “New Method”—explained the methodology he devised for this huge and far-reaching endeavor.

The fourth step, which he called “The Ladder of the Intellect,” was the first in the next tier of the process—that of attaining philosophical illumination. Bacon described this step as demonstrating the various insights and principles found in the first three steps “before the eyes” so that people could understand and absorb them—such as in art, literature and hands-on education. He wrote: “For I remember that in mathematics it is easy to follow the demonstration when you have a machine beside you, whereas without that help all appears involved and more subtle than it really is.”

Francis Bacon discovered the power of theatre when, at twelve years of age, he wrote and starred in a little play called The Philosopher King, performed before the Queen herself. He learned that drama was a moving, effective means by which philosophical and moral principles could be set “before the eyes” of rich and poor, educated and uneducated alike. Thus, some Baconian scholars have come to the conclusion that by writing the immortal plays published under the mask of Shakespeare, packed with their profound life lessons, he showed us a powerful way to implement Step 4 of his Great Instauration.

For a brief overview of the many controversies surrounding the ciphers said to have been discovered in Shakespeare’s works, see my article entitled “Shakespeare Cipher Stories.”