FREE To Remain After Time by Khalil-Ghibran Original Version 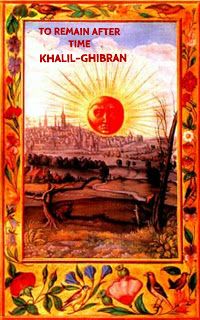 TO REMAIN
AFTER
TIME


No part of this publication may be reproduced, stored in a retrieval system, or transmitted in any form or by any means, electronic, mechanical, photocopying, recording, scanning, or otherwise, except as permitted under Sections 107 or 108 of the 1976 United States Copyright Act, without either the prior written permission of the Publisher

Kheops and the Chamber Choir

After Fire Comes The Rain

Joy Without A Mortal Care As If Young

St. John's Dystopia of good and evil
Add the words my dear people

A revelation and resurrection
Come after the return of perfection

So now until it is finished
Paradise has turned to prison

Again paradise lost and what remains?
Nothing but world, water and shame


WHAT WON'T TAKE ME

He opens to "What Won't Take Me"

"What Won't take me,
Is going to make me,
Stronger than before,
This I know for sure

What Won't take me,
Will never break me,
Stronger than before,
This is my reward"


AMONG THE DEAD'S DREAMS

I write with a bitter tongue
For the frightful one

Comes at the dawn
To check on his pawns

To see what's written
Or what if it's fitting

On some occasions
Upon his persuasion

Once upon a dream
There is one thing

That destroys all
That decieves all

Makes wrong of right
What a deadly sight

That of death
That who never rests

Watch his moves
Or spell the doom


ROSE IN A GLASS


FACE OF THE DEEP (ORIGINAL)

Lorenzo: My lady, I have seen and tasted your chaste
Althea: And that is, which you cannot have
Lorenzo: You share no fruits in vain, my love
Althea: I bear no truth in shame, my love
Lorenzo: For what shame is there to come?
Althea: The return for pleasures done
Lorenzo: My dear, you speak as if foreign
Althea: Though I speak in accordance
Lorenzo: Don't hold your tongue
Althea: I have just begun
Lorenzo: The look on your face is new
Althea: Only to the blind you fool
Lorenzo: Your speech has me spooked
Althea: You will do what I wish of you to do
Lorenzo: Is this your opinion?
Althea: Mine and of my minions
Lorenzo: Then betrayal I must bare
Althea: Your lust has become a snare
Lorenzo: Behold the trap of a shrewd
Althea: A trap first set in the nude

Lorenzo: My lady, I have seen and tasted your chaste
Althea: And that is, which you cannot have
Lorenzo: You share no fruits in vain, my love
Althea: I bear no truth in shame, my love
Lorenzo: For what shame is there to come?
Althea: The return for pleasures done
Lorenzo: My dear, you speak as if foreign
Althea: Though I speak in accordance
Lorenzo: Don't hold your tongue
Althea: I have just begun
Lorenzo: The look on your face is new
Althea: Only to the blind you fool
Lorenzo: Your speech has me spooked
Althea: You will do what I wish of you to do
Lorenzo: Do you conspire queen?
Althea: ?
Lorenzo: Then betrayal I must bare
Althea: Your lust has become a snare
Lorenzo: Behold the trap of a shrewd
Althea: A trap first set in the nude
Lorenzo: Must I do your bid?
Althea: If you would like to live
Lorenzo: And what lies before death?
Althea: The king will see his last breath
Lorenzo: What is your bid?
Althea: To see the king no longer live
Lorenzo: You are I'm just as foul as mad
Althea: What choice do you have?
Lorenzo: To vanish out of sight
Althea: They'll find you by night
Lorenzo: Fair well, this is my last lay
Althea: Dig your own grave, my love


BIRDS IN A FLASK


TO REMAIN AFTER TIME

In sodium and precipitate
Inviolable inpenetrant

For to remain after time
Yield on fields for wine


CENTER OF THE WORLD


HEAVEN IN THE FLESH


UNTIL THE DAY OF THE LAST JUDGEMENT


NO OTHER THING IN THIS WORLD

It makes projection in bodies for all diseases
For gold cannot be made so easily
You must not put any strange thing unto it
There is none so poor which cannot operate this work
Small labor, little art and expense and in a short time
Conceal it from people for reason of evil
There are many and different works in the mineral stone
Whereof many strange parables are written
It makes projection upon all imperfect metals
No other thing in this world but this stone


SO LONG AS IT DROPS

Who's ever knows it, and can prepare it needs no more
For the spirit of air lies in the inward part of all things
The air exceeds from herbs and flowers externally
The air and the taste are on spirit
What wonders work in inferior things
There are no colors but in the spirits
So that there is in it, red and yellow sulphur
They say, it is a dry water
It is to be found in all towns and places
Make it fix the mercury and sulphur with its earth
Give it fire so hot as the heat of the sun
Matter should melt as if it were oil
There is one way of pouring on the water of paradise
By little and little and drive it so long as it drops

Acquire an absolute
Insoluble to suit