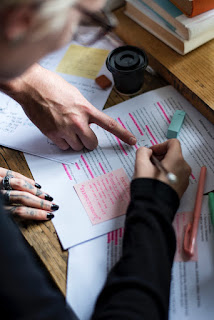 Place the longest item at the end of a series.

Start with the simple and work toward the complex.  It’s less confusing and makes a more memorable ending to the sentence.  If you have a series like “He was always later that Joan, loud and boring.”  Opt for “He was loud, boring and always later that Joan.”
Specifics are more convincing.

Unless you must for legal reasons, don’t use words like many, several, approximately, nearly and other such mushy weasel modifiers. Specifics tell your audience that you know what your product can do based on tests, research, results, etc.

(You’ll still pay the penalty for running into a truck, but at least you’ll come across as sober.)

Why use a 4- to 5-word phrase when a 1- to 2-word version will do nicely—with no loss in meaning?  Statements like “in view of the fact that” can be easily reduced to “since” or “because.” Word economy is particularly important, especially when you’re paying for premium ad space in a major publication.

Redundancy is good for space travel, but not for clear writing.  Phrases like "anticipate in advance," "totally finished," or "vital essentials" will drive your readers crazy and communicate very little. The same goes for stringing two or more synonyms together like "thoughts and ideas" or "actions and behavior.”  It makes readers wonder if you really meant to say two different things or just wanted to reinforce one word with a needless synonym.