The Crusades Of Writing 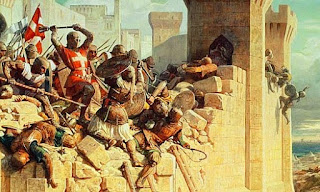 This article does not discuss what to write or how to write, but merely a favorite – why to write.

The world appears in its dissatisfactions. Potential lies in the prospect that desires to change it, and prosperity lies in the chaotic chase that has already begun. Writing is barely a provision of the many to choose from.
Any man can breathe. Any man can disembowel liquid. Any man can write.
Writing becomes a necessity when the worthier elements of life like love and joy, become pursuits instead of possessions. Those who like to mouth ‘I love to write’ might as well have ‘loved to bungee jump’. So often, writing is an escape rather than a commitment, an alternative rather than a motive, a hobby rather than an involvement.
The difference between writing, when writing is the object of a desire, and writing, when it is the dearth of one, is similar to the difference between consuming food through your mouth or your nostrils. One is precise; the other is either foolhardy or deliberate.
A failure in one’s life is an achievement in one’s vanities. A hurt pride resorts to dissimilar paths of self-absorption eluding the one that confronts its vulnerabilities. Those who fail as intellectuals, rise as diplomats, but never cede to be individuals – because compliance with circumstances defeats the purport of the indomitable convictions of man, so likely, we forge more humane opportunities.

Opportunities that are severely consistent, ripe and simple. Opportunities like writing.
Once again, take notice – Any man can breathe. Any man can disembowel liquid. Any man can write.
The object of scrutiny when two things are placed in contrasting contest is not spurious triumph, but progress through aptitude. Sometimes, it is essential to lose, and sometimes it is downright pivotal; it is forever substantial to remember that neither is success a construct of victories, nor is it a servant of one. Success lies deep in the path of experience and often, unknowingly, people who disembowel liquid, bungee jumpers, writers - pass it demurely. It is a fervent moment writhing within several unnamed others; it cannot be achieved, it has to be a yielding harvest.

In writing, there are no discoveries, only inventions – those, that either concoct interest or intrigue. If anything in the written connotation is a function of the former, it is languid and specious. If anything, at all, as it has been a rarity for so long, compromises with the latter, it is grand, unique, most welcome, and most awaited.
Uselessness is an innate, inherent part of writing anything. Futility, you see, is perfect and the only thing that is so. Those who master it are legends, those who come across it accidentally are writers, and those who tend towards it are fools. Those who come closest are renowned as professionals.

Precision in any sort of writing is a triviality and a widowed cliché. There is no ‘bull’s eye’ in perspectives, in predilection or in opinion; it is consequential to generalize. A thing that is meant to socialize with more than a single existent word should never focus or centralize acutely. It’ll fail to stand ground, and eventually fail to impress.

The diversity one writer inures to delineate himself from another is only in an unrealized, imperfect conformity of perseverance. Hard work is an unknown realm, a world within a world, a most secret horizon of each written syllable – when we expand these realms and horizons, when we free our worlds, we can hope towards hope… to be writers. A just and lively hope to be good writers, and if not, efficient in the least.

There is still a last truth to reckon with, again and again, until it is defunct and old and as gray as cement stripping off naked walls –