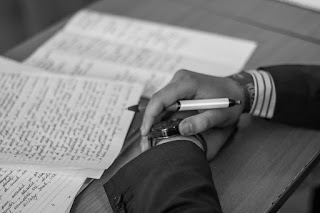 Over the years, I’ve found that new screenwriters frequently have confusions and misunderstandings on the proper way to write slug lines, also known as master scene headings.   This article covers the basics of writing industry accepted screenplay slug lines.

Scene headings or slug lines, as they are commonly called, are a widely accepted convention of “spec” or “master scene” screenplay form.  Over the years, I’ve found that new writers frequently have confusions and misunderstandings on the subject, despite having read a basic book or two on the craft aspects of screenwriting.

Hence, the reason for this article.

Every time the “where” or the “when” of your story changes, it’s expected that you’ll reorient the reader as to location and time of day with a new slug line.  A slug line is composed of three parts:
1) INT. or EXT.
Is it an interior or exterior scene?

2) WHERE
The physical location or name of the set where the action of the scene takes place.

Whether a scene is INT or EXT is to some degree relative.  In truth, some of your INT scenes may be shot outdoors and some of your EXT scenes shot indoors against a blue screen.  For the sake of simplicity and consistency, I recommend that if the action takes place IN something (a building, a car, a spaceship, etc.) label the scene INT.  If the scene takes place outdoors, and not in something, label it EXT.

It’s generally considered poor form to use INT/EXT in combination in a slug line.  If the action of a scene shifts from INT to EXT, or EXT to INT, write a new slug line.  If you find yourself in a situation where you’re inter-cutting rapidly between an INT and an EXT location, chances are you’re usurping the job of the director by writing HOW your story should be filmed rather than simply telling your story in a compelling fashion.
Scene locations should be specific and descriptive.   “INT. RESTAURANT”, is a poor slug line in that it’s neither specific enough, nor descriptive enough.  Slug line locations such as, "INT. WANG CHOW’S CHINESE JOINT” or,  “INT. BIG ED’S GREASY SPOON DINER”, being both descriptive and specific, are far more visual in the impact they have on the reader.

Be consistent in your description of scene locations.  Once you’ve labeled a location as JOE’S BAR AND GRILL, it should not mutate into JOE’S RESTAURANT, and then later, THE BAR AND GRILL ON 8TH STREET.  After your screenplay is sold, it will be broken down by location and time (day or night) for budget and scheduling purposes.   (Obviously, it’s far more efficient to shoot all scenes taking place in the same location at the same time.)  Be kind to your readers by labeling scene locations in a consistent manner.

Avoid presenting extraneous information in your slug lines.  (EXT. SANTA MONICA PIER – 1912 - POURING RAIN – DAY)  Remember that the audience will never see your slug lines.   If it’s important, and not self-evident, that it’s pouring rain and the year is 1912, find a way to present that information via action or dialogue in a filmable way.
Keep your slug line extensions simple. Ninety-nine percent of the time, “DAY” or “NIGHT” will suffice.  And again I would remind writers that the audience won’t ever see your slug lines.  I know of no good reason to indicate action is consecutive by using, “CONTINUOUS” as a slug line extension.  If action is “continuous” it should be self-evident.

Are some very good high-priced writers non-conventional in their handling of slug lines?  You bet!   But keep in mind as a new writer, if you follow the generally accepted conventions of screenplay form and format, you’re far less likely to distract the reader from the tale you seek to tell.