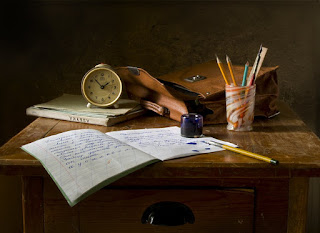 Our culture has always had a curiously ambiguous attitude towards its artists, who are alternately reviled or else elevated to nearly god-like status. They seem to be perceived as other-than-human, able to dispense with leisure, comfort and normal security and happiness in order to function within society AND bestow the gift of their insights upon everyday folks. People don’t generally ask their plumbers whether they’ve painted any wondrous canvasses lately, or ask their tax consultants if they’ve been inspired with mystical poetry. Yet modern-day artists are expected to magically fulfill their creative vision AND be shrewd, practically-minded and business-savvy.
Let’s consider this two-fold demand within the realm of the writing and publishing world. It takes a very different faculty of the mind to conceive of – and realize – a fictional novel or short-story than to draft a query letter or book proposal. Writers of genius might flounder in obscurity because they can’t grasp the intricacies of the publishing game, while writers of lesser talent thrive because they’re business-minded and know how to produce sleek press releases; or because they’re social butterflies at writer’s retreats or build up a coterie of influential contacts in New York.
When people write with one eye on the market, their books are robbed of something essential. The resulting work finds its niche – it becomes popular because it appeals to a ready-made audience – but it’s already lost its soul.
Writers who refuse to compromise their artistic vision will oftentimes be obliged to promote their work at a grass-roots level. This takes time; not only for people to become aware of the existence of these books, but also to open their minds to something they’ve not been exposed to before.
What’s seldom pointed out, though, is that every genre that exists today began with a groundbreaking book or story that no one knew how to categorize. J.R.R. Tolkien’s publishers hailed The Lord of the Rings as a work of genius, but also admitted that they didn’t know who the work would appeal to. Nowadays all the major booksellers boast at least one rack devoted to epic fantasy, and a high percentage of the books filling those shelves are an imitation of the seminal Middle-Earth trilogy. Pulp writers like H.P. Lovecraft and Robert E. Howard also found a much wider readership – and hosts of disciples – after their deaths.
It’s been a long time since I’ve even purchased a book that came off the press of a major publisher. I do a little more footwork, these days, when searching for reading. I browse author websites, discussion forums and blogs. What I often find are groundbreaking works that never got the “seal of approval” from a big house because they couldn’t be easily categorized and labeled. They weren’t “the next” Harry Potter.
Perhaps it would be prudent for me to advise you, fellow writer, to educate yourself in all aspects of the publishing industry; to go to retreats (if you can afford them) and consult with agents and editors; to learn to polish that perfect query letter and, later, press release; to research the marker for publishing trends and reader tastes…
But, as I intimated earlier, the hand that wields the pen is sometimes not so adept at guiding the plow. A fertile imagination makes conformity difficult, if not impossible; and adapting your creative impulse to a popular genre - or to an editor or agent’s idea of sellable material – is conformity.
Instead I’ll offer a piece of imprudent encouragement. If you have a burning desire to write a story, then that is a story that WANTS to be born. Forget considerations like “what sells?” or “what do agents/editors look for?” Ideas have energy and life-force; once given birth to, they tend to find their own way in the world. Your audience is waiting. They might not even know it yet, but they are. Your inspiration has arisen as the answer to someone else’s prayer. Honor your vision.